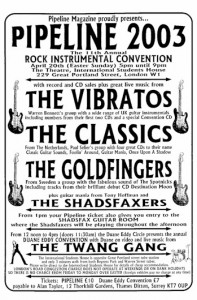 On Sunday 11th April, 1993 Alan Taylor stepped up to a microphone in the theatre of the International Students House, close to London’s Regents Park, and welcomed the audience to the first Pipeline Instrumental Convention. Almost exactly ten years later Alan was on that same stage, albeit refurbished (the stage, that is, not Alan) to open the 11th such gathering. The 1993 event was a big gamble, but Alan and Dave’s faith proved justified, and the Convention has seen a succession of instrumental acts grace its stage. Not only contemporary bands keeping instros alive, but some of the legendary names from the ’60s have taken part, not for the money but simply to share the music we all love. From that first Sunday with The Runaways, The Scorpions and Nero & The Gladiators, Pipeliners have enjoyed live sets from Highway Patrol, The Surf Rats, The Hunters (twice), The Rapiers (twice), The Falcons (twice), The Fentones, The Moontrekkers (twice), Nero & The Gladiators (twice again), “1961”, Sir Bald Diddley, The Cougars, Local Heroes (twice), The Scorpions (again), The Temebeats, The Silhouets, The Spacemen, The Boys, The Vickings, Brian “Licorice” Locking, Husky & The Sandmen, Pipeline ’61, The Jaguars, Bert Weedon, The Centurions, The Secrets, The Reflections, The UB Hank Guitar Club Band, The Invaders, Los Jets, Lost 4 Words, Legend, The Charades and The Tornados. A truly cosmopolitan list. Family commitments kept me away from the first two events, but I have willingly endured family gripes, travel problems and penury to be at every one since 1995. Ray Liffen’s excellent videos capture much of the unique atmosphere of Conventions, but in truth, you have to be there…
Following two years at the Conway Hall in Bloomsbury, the Pipeline Convention returned to its original home at the ISH and again shared the day and the facilities with the Duane Eddy Circle who were holding their 25th gathering. Circumstances prevented the customary Saturday night gathering of Pipeliners, so I put the time to good use by visiting the Prince of Wales Theatre for Cliff The Musical which featured a good contribution from the afore-mentioned Rapiers.

The Duane Eddy Convention was the usual mix of audio and video clips plus live music from the excellent Twang Gang, who this year played a short acoustic set earlier in the programme before closing the proceedings with their customary polished selection from Duane’s repertoire. As usual, three sides of the hall had a good range of stalls with CDs and other merchandise. An instrumental fan and his money are soon parted! With the return to the ISH, the Pipeline Guitar Room was back in its own accommodation under the genial supervision of Tony Hoffman and Eric Kingdon, and a succession of players kept things going throughout the afternoon.

On to the live music. Only three bands this year, but a varied selection of instrumental sounds of the highest quality.

From Sweden, The Goldfingers were known primarily through their excellent debut CD Destination Moon which offered a selection of Spotnicks favourites plus other numbers played in Spotnicks sound. That the band were asked to play at a Spotnicks festival organised by former Spots drummer Ove Johansson speaks for itself. Alan Taylor pointed out in Pipeline 58 that a Spotnicks set always includes vocal numbers, as their short set at the London Palladium in March showed. The Goldfingers, however, offered a completely instrumental collection of numbers which included virtually every major Spotnicks favourite. It could be argued that The Spotnicks only have one sound, but when it is as great as the “spacial” sound created by Bo Winberg and Co., what does it matter! Classic after classic came from the guitar of Lennart Sundberg. Special mention, too, of Tomas Persson who replaced Hasse Strandberg at short notice, having only two weeks to rehearse about 20 numbers. Solid support from Lennart Eliasson on bass and drummer Jan Andersson who also handled the introductions. A real treat for the Spotnicks fans among us, a fine introduction to anyone unfamiliar with the music of the Spotnicks, and a great start to the 2003 Convention.
I for one hot-footed it over to Tony Hoffman’s Shadsfax stall to pick up a copy of Destination Moon. A special mention to Ake Hammerin who was instrumental (pardon the pun) in bringing The Goldfingers to London.

During the interval, entertainment was provided by Maurice Woodcroft of the South Wales Shadows Club who played a selection of Shadows and Shads-style numbers. As always there was an opportunity to look for more goodies on the stalls, to refill glasses at the bar, or simply to catch up with friends old and new. The next slot on the programme was filled by a group from Holland with a real pedigree.

The Classics have a number of CDs to their credit with varying line-ups, but always with Paul Selier. Paul is a well-known figure in the instro scene, having also played with The Tickets, The Giants and The (Dutch) Dakota’s, and founded Echo Records to promote the music we all love. Joining Paul were Jon Blonk on drums, Rob Pronk on rhythm guitar and Johan Schippers who started the set on bass. And a good set it was too, mixing Euro sounds with Ventures numbers and some of the less familiar British material. It is quite refreshing to hear a set which combines such varied influences. One of the instrumentals which was new to me was Mirage, about half way through The Classics set. This featured a drum solo, during which Paul and Johan swapped lead and bass guitars for the remainder of the set. Nice touch. It was really enjoyable to hear material from the Jumping Jewels, Rene & The Alligators and so on.

No Pipeline quiz this year, but another set under the aegis of the Shadsfaxers. Ian McCutcheon is a well-known face at Shadows clubs up and down the country and his Shadows Workout CDs are valued by aspiring Hank Marvin stylists. Ian entertained Pipeliners to a variety of Shadows numbers – using his own backing track CDs, of course!

Topping the bill at this year’s Convention, The Vibratos should have occupied that spot last year, but as Warren Bennett explained, he and Mark Griffiths were otherwise engaged in the backing band for “Frank Martin”. Making only their second live appearance, their visit to the Convention was eagerly awaited. With Warren on keyboards and guitar and Dick Plant on lead guitar were Mark on bass and Dave “Robbo” Robinson on rhythm guitar. The daunting task on sitting on the drum stool, occupied by Brian Bennett at Shadowmania, fell to Robbo’s fellow member of Past Masters, David Eyre, who proved to be more than up to the job. As at Lakeside, the Vibratos opened with a Shads number, The Rumble, followed by Brian B’s composition for The Krew Kats, Jack’s Good. An Outlaws number preceded two tracks from the first Vibratos CD. Warren and Dick have a great love of some of the classic British instrumentals, and the band gave us super versions of two of them: The Storm by The Hunters and Rhet Stoller’s Chariot. From the latest Vibratos CD came the Theme From Department S, then Dick’s own composition The Peacemaker. Another great, but often overlooked classic instrumental is Ron Grainer’s Bristol Express, originally recorded by The Eagles but given The Vibratos treatment at Pipeline. A cracking version of Jezebel was followed by a straightforward Joe 90, without the drum solo which the band incorporated at Shadowmania. The set concluded with the tongue-in-cheek Grieg and a closing Shadows number. Inevitably there was an encore, a Ventures-influenced version of Walk Don’t Run. Once again, a memorable set from a band who care very much about instrumental heritage – even asking for suggestions on the Shadow Music website – but still incorporate a healthy degree of originality.

As a bonus, Warren and Dick put together a Convention CD-EP which was available from the ever-genial Pat and John on the Leo’s Den stall. Even if you were not there, it is well worth acquiring as it includes tracks which the band featured on Easter Sunday and at last year’s Shadowmania.

Footnote:
As I came into the hall towards the end of the Twang Gang set, I noticed a well-known instrumental fan sitting in the audience wearing his slippers. The Convention is a bit like that, as you feel at home right away. It is worth reminding those who attend, and those who don’t, that the Convention is run on the proverbial shoestring by a dedicated and enthusiastic band of volunteers, and that the bands who play every year do so because they want to be there and not because they make vast sums of money, because they don’t! To The Goldfingers, The Classics and The Vibratos, the stallholders, not to mention Alan, Dave and the other Pipeliners backstage and front-of-house, a heartfelt “thank you” from this instro fan.