The pre-Millenium Convention was a little different this year with three groups hardly known in this country plus a nostalgic nod to the gentleman of the electric guitar, Mr. Bert Weedon. Everything started an hour earlier than usual with The Duane Eddy Convention kicking off at 11.30 am. It was their 21st event, quite an achievement and as usual the main man kept his distance – but Arthur had plenty of video clips and the Twang Gang seem to get better every time I hear them and this year was no exception. 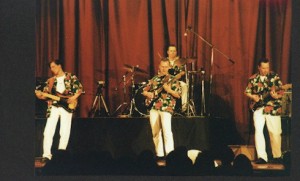 They kicked off the evening and anyone who has witnessed their debut CD/10″ album “Arabian Nights” from 1996 will know what to expect. This surf quartet from Finland left their keyboards at home and relied on an all guitars affair and kick off they certainly did. Their album was a 14 tracker (only 10 on the limited vinyl release) mostly of original material with occasional covers of Ventures and Link Wray lesser known tracks. Their Pipeline set followed a similar trail, their 15 tracks incorporating music from their CD plus newer material in a similar vein.

They appeared on stage neatly dressed in Hawaiian shirts and got down to business immediately. Confident, short, sharp originals are their forte and they perform such numbers well. They even dressed up the old Japanese pop hit “Suki Yaki” in a stomping style. As the set continued, three youths walked to the front of the audience and proceeded to mimic the art of dry surfin’.

Lead guitar (Teemu Liukkonen) duties were some times handled by the rhythm player (Ben Engblom) who came into his own on the exciting original “Batcave”. With their Fender equipment (Jaguar, Jazzmaster & Precision bass) they had the right tools for the job too.

A slow ballad “Hukilau Moon” was the only hint of The Shadows and the group offered new material which will hopefully appear on a second album. A fast, urgent, rocker known as “Distrainer” was one of them, followed by a happy beater in the style of the Astronauts “Baja” but moodier and with more changes. “Ridin’ the wild surf” incorporated all their best ingredients and as an encore they attacked my favourite Astronauts track “Firewater”, closing as they began, on top form. I look forward to their second release and more of their lively organ sound that was sadly missing from this set. 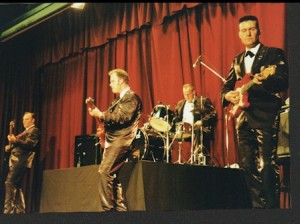 Here was a tight, professional quartet from Holland who normally do a mixed vocal/instro set but their 19 strong instro delights displayed just how versatile they were. General spokesperson was Harold (the bass player) who dished out the between-tracks information.

Impeccably dressed in glittering silver/grey suits, with two red Stratocasters plus a sunburst bass and not forgetting the winkle-picker shoes! These guys presented a superb mixture of Indo-Rock material (much favoured in Holland), a few Shadows covers plus some familiar instro hits. Guitarists Haico (lead) and Roger (rhythm) work off each other well and opened with the only original in their set “Revenge of the Rockers”. This track was available on their 4 track EP being sold on the day which included another fine instro piece known as “Brainstorm”.

Of course they played “Pipeline” and their three Shadows numbers were performed with ease. Drummer Harry maintained a full sound throughout whilst on “The Savage” the guitars went for the jugular with that ferocious rhythm guitar keeping perfect time.

If you are familiar with the Indo(nesian)-Rock scene, which often relies on traditional-type melodies, you will surely know the originals. “Ajoen Ajoen” was a popular hit for Willy & His Giants whilst the Tielman Brothers recorded “Black eyes rock” during the late 50s although this track is more often linked to Electric Johnny. The Pipeliners gave a good performance of this exciting track. By contrast, a beautifully winding ballad, full of rich, melodic runs known as “La Comparsa” was originally a good seller for ZZ & De Maskers, it was played with superb feeling and sensitivity.

The Jumpin’ Jewels inspired “Dakota” (best known in the UK as by the Shadows but originally cut by composer Tommy Reilly) was a catchy number that somehow had all the trappings of 1963, the year it was written. The other Indo-cover, “Roller’s Express”, originally by The Rollers was a twitchy 12-bar with superb beat and neat phrasing. After an infectious Hunters cover the group ran through “Walk don’t run” and “Wipe out”, the latter giving a brief nod to the Routers’ “Let’s go”.

You may recall Joe Brown singing a cockney song about Strutter’s Balls early on in his career but here it was performed minus the lyrics and it sounded great. They also covered the old South-African hit “Zambesi” by way of the Shadows sound. For an encore they captured the authenticity of the Tornados “Telstar” without using an organ and they climaxed with “Guitar boogie” shakin’ like the leaves on a tree.

Pipeline (the event) were extremely lucky to find Pipeline (the group), now all we need next is an instro CD to complete the picture.

The Rumble / Walk Don’t Run / The Munster’s Theme / Goofin’ Around / Subject In Orbit / Perfidia / The Rise And Fall Of Flingel Bunt / Flying Blondini / Flotte Biene / Genie With The Light Brown Lamp / The Mexican / F.B.I. / Wipe Out / Man Of Mystery 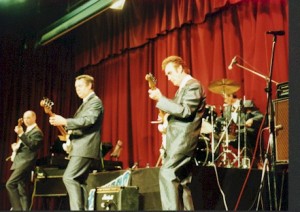 This group hail from the Kent area and once released a vinyl EP housed in an eight-inch sleeve (which resulted in the problem of where to store it!) but it included the excellent “Flying Blondini” track that they were to play live. They do have a current CD release called “Git it” with a ration of 8:1 vocals against instros. Also looked the part too in matching suits, shirts and white shoes. They normally have to perform a mainly vocal set but relished the opportunity to go all-instrumental.

Opening with the Shads well-known “The Rumble”and a heavily echoed Ventures cover they sparkled through the much-loved Munsters TV show, even Herman would have grooved to this! They turned the clock back for an affectionate homage to Bill Haley’s Comets for the boogie number “Goofin’ around” which is seldom performed these days. It was almost into jazz by the middle section where the bass and drum provided some tight interplay.

The Shadows were paramount in their set with the cha-cha beat of “Perfidia”, a straight “Flingel Bunt” plus a very pretty “Genie with the light brown lamp”. Switching to the Spotnicks to perform “Subject in Orbit” which has shades of “The savage” about the urgent rhythm.

A stab at the Fentones “The Mexican” was brave but the crowd pleaser had to be “Wipe Out”, where the rhythm player took the drumstool whilst the drummer removed part of his kit and proceeded to play it flat on his back, on the ceiling and in all manner of unnatural positions! To thunderous applause they closed their excellent set with “Man of Mystery”.

Mention must also be made of two of Clive’s originals. A driving 12 bar, “Flying Blondini”, and “Flotte Biene”. Yes, the name has a special significance to Clive (though he didn’t reveal it to me afterwards) and it’s full of Russian vodka fumes – this very strong melody is surely worth an official release? Perhaps they may now consider more instrumentals in their regular set, did I mention the matching white Fenders? (Thought not.) 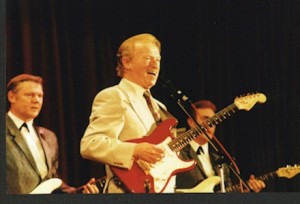 BERT WEEDON
with The Jaguars

Bert is now in his late-seventies, the gentleman of the electric guitar who provided the evening with a nostalgic trip through his many years in show-business. Between melodies (backing from the Jaguars) Bert recalled some of his famous little stories about the business. He only plays occasionally now and has a modified Stratocaster which uncannily sounds just like Bert Weedon and nothing like the general Fender Strat sound !

He opened with a cover of a Buddy Holly song (he would return to Buddy later on) and then his own arrangement of “Apache”. Bert’s fingering is light with spartan use of the tremolo arm but of course he is better known for playing a Guild guitar. Introducing “Guitar Boogie Shuffle” probably confused the audience totally as what Bert actually played was a medley he recorded for Polydor back in 1977 known as“Rocking Guitar”. This utilises pieces of his hit “Guitar boogie shuffle” but then adds “See you later Alligator”, “Shake rattle and roll” and “Rock around the clock” (plus more on the disc).

A couple of blues numbers didn’t go amiss, “The Blues” was a straight 12-bar and midway I caught phrases from Gene Vincent’s wonderful “Be-Bop-A-Lula”! The second blues was a fine tribute to the Graceland Gangster, Elvis, on “Heartbreak Hotel”. Bert cut a cracking version in 1970 for his comeback rock’n’roll album “Rockin’ at the Round House”. Bert also played the flipside of his single “Gin Mill Guitar”, the ballad “Can’t help falling in love”. Less familiar was “Gimme that jive”, a traditional tune in “Sorry Robbie” mould. Surprisingly Bert recalled it only sold 12 copies upon release, but where or when did this happen? I’ve certainly never seen it documented.

Bert also tackled Santo & Johnny ballad Sleep Walk and when he went into a lilt for the old country hit song “Oh, lonesome me”, several members of the audience could be seen singing along! The set closed with his slowed-up version of Shakin’ Stevens “This ole house”. Bert never took an encore so there was a sense of anti-climax after he had gone, but he should be fairly judged at a nostalgic level – I mean the guy doesn’t have anything to prove anymore does he?

Looking back I believe the evening was a success and we can only hope that the Pipeline Convention can enter the Millennium with renewed vigour, carrying the torch for instro music through to another century. Now that’s one heck of a thought, isn’t it !

Alan Taylor reports on the pre-Convention instro night out….

No, it doesn’t quite have the same ring as Saturday Night At The Duckpond does it! But for those who had travelled from afar and were staying overnight, and those of us who turned out to help them drink the night away, we sure had a ball. Apart from talking instros, we were thoroughly entertained by members of The Secrets. They lined up as Jim “Mr Guitar” Nugent on lead guitar, Ray “It was a Burns once” Liffen on rhythm, Trev “Mr Organ”(?) Faull on organ, Pete “Pogo” Walter on bass, and Dave “Hitman” Burke on skins.

They played two sets and even drew in a few of the students to marvel at their musical perspicacity. Barely pausing for a break, they were joined midway by the Scottish branch of FOAT in the form of George Geddes and Ken Irving on guitars. These two intrepid travellers nobly performed despite the third member of their planned trio chickening out and fleeing to America at the last minute. That was true “the show must go on” spirit lads. Or was it the beer? Anyway, another bold fellow was Luc Kennis of The Vickings who reminded us of the great set they performed for us last year with another quick-fingered display.

A big thank you to all those who made it such a fine start to our instrumental weekend.